CUES has been the Standard of the Industry since 1963.

In the 1940's, Penetryn Systems was a company that made the bulk of their profits from the rehabilitation of the concrete used on railroad bridges during the World War II period. In 1961, a patent was filed based on a packer that could isolate the open joint in a sewer or pipeline. This patent was approved in 1963. 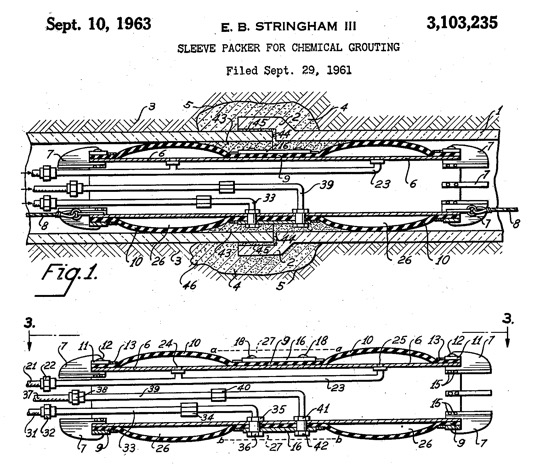 Penetryn Systems formed a sewer inpsection division and promptly expanded into providing services for the inspection, cleaning, and grouting of sewers. Penetryn Systems decided that the equipment being used in these processes was marketable to municipalities and formed CUES (Acronym for Community Utility Equipment Supply) in 1963.

CUES located the company in Hollywood, FL because of their proprietary sewer joint sealing grout process and the potential for its widespread use in this location due to the high ground water conditions. The company began its efforts to market this sewer inspection equipment nationwide starting with the efforts of Wally Huber, Dan Daley, and Bill Thompson. As the company expanded, it identified the need to more closely manage its resources, quality, and manufacturing processes. In 1974, Ken Guthrie was hired by Penetryn Systems as the General Manager of CUES. Having years of experience with pipeline rehabilitation and installation, Mr. Guthrie became highly involved in the development of new products that would have significant influence in the future of the industry.

Guthrie's tenure lasted from 1974 through 1988. During his tenure, CUES innovated and pioneered the initial equipment developments of the trenchless technology industry and would have an industry-wide influence that is still strong today. CUES became the first sewer camera manufacturer when it developed the first closed circuit television(CCTV) inspection system (LIS) that would enable municipalities to access their lateral services from the mainline for the purpose of sewer camera inspection.

CUES then prototyped the first Lateral Sealing System (LSS) as a packer that would enable cities to successfully grout the connection of the lateral service to the mainline and up to the first joint of the lateral. This was a natural development from the LIS inspection. 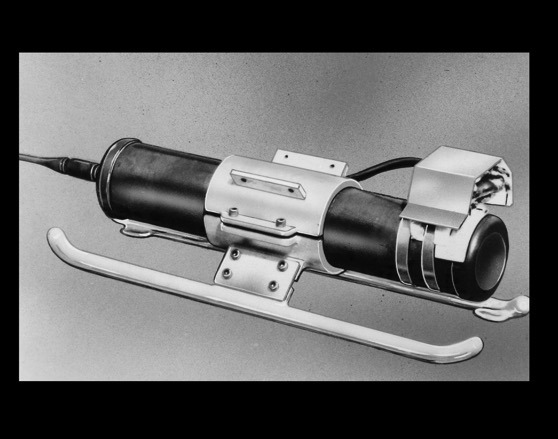 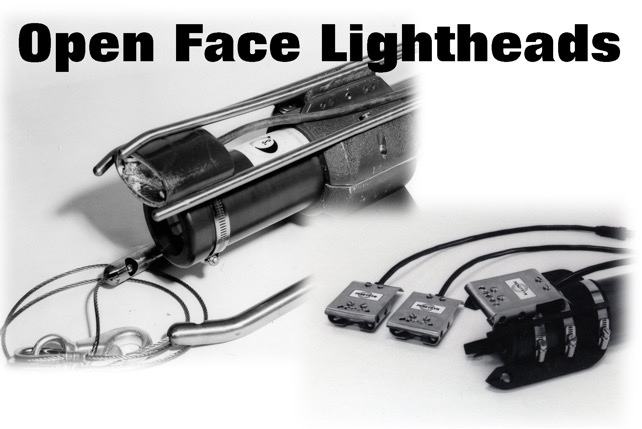 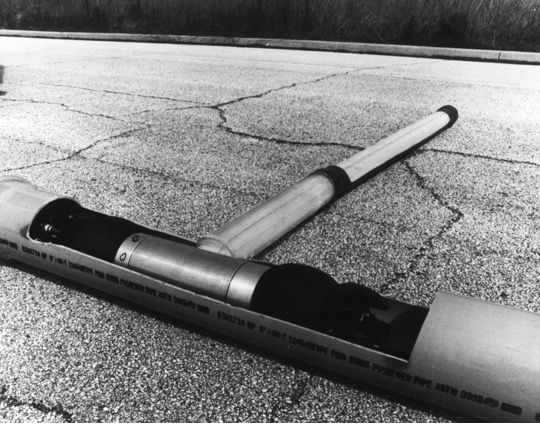 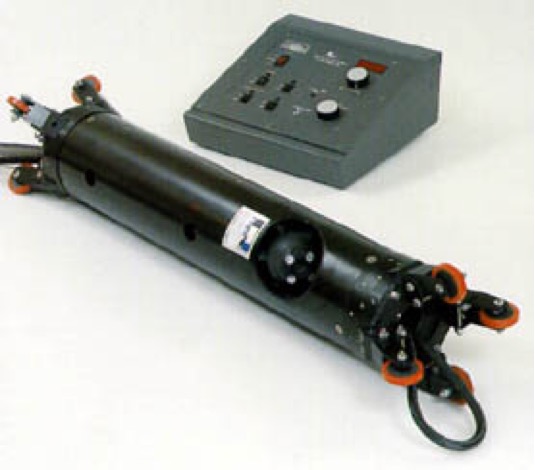 Next, CUES built the first solid state mainline sewer inspection cameras, replacing the fragile vidicon and saticon tube cameras. The solid state sewer cameras were a major improvement and produced the standard for durability and reliability.

In 1984, CUES produced the first self propelled sewer camera carrier (transporter) in the industry. Previously, operators were towing the sewer camera through the lines via a winch or Jetter truck. Set up was cumbersome and expensive and dead end lines with no remote access could not be inspected. The self propelled sewer camera transporter enabled the operator to quickly insert the camera into the line and eliminate the need for the winch or extra truck mounted equipment. Dead end lines that were previously so difficult to inspect now were accessible with minimum set up time. 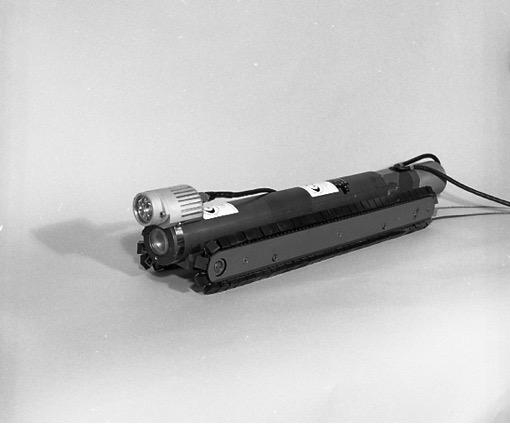 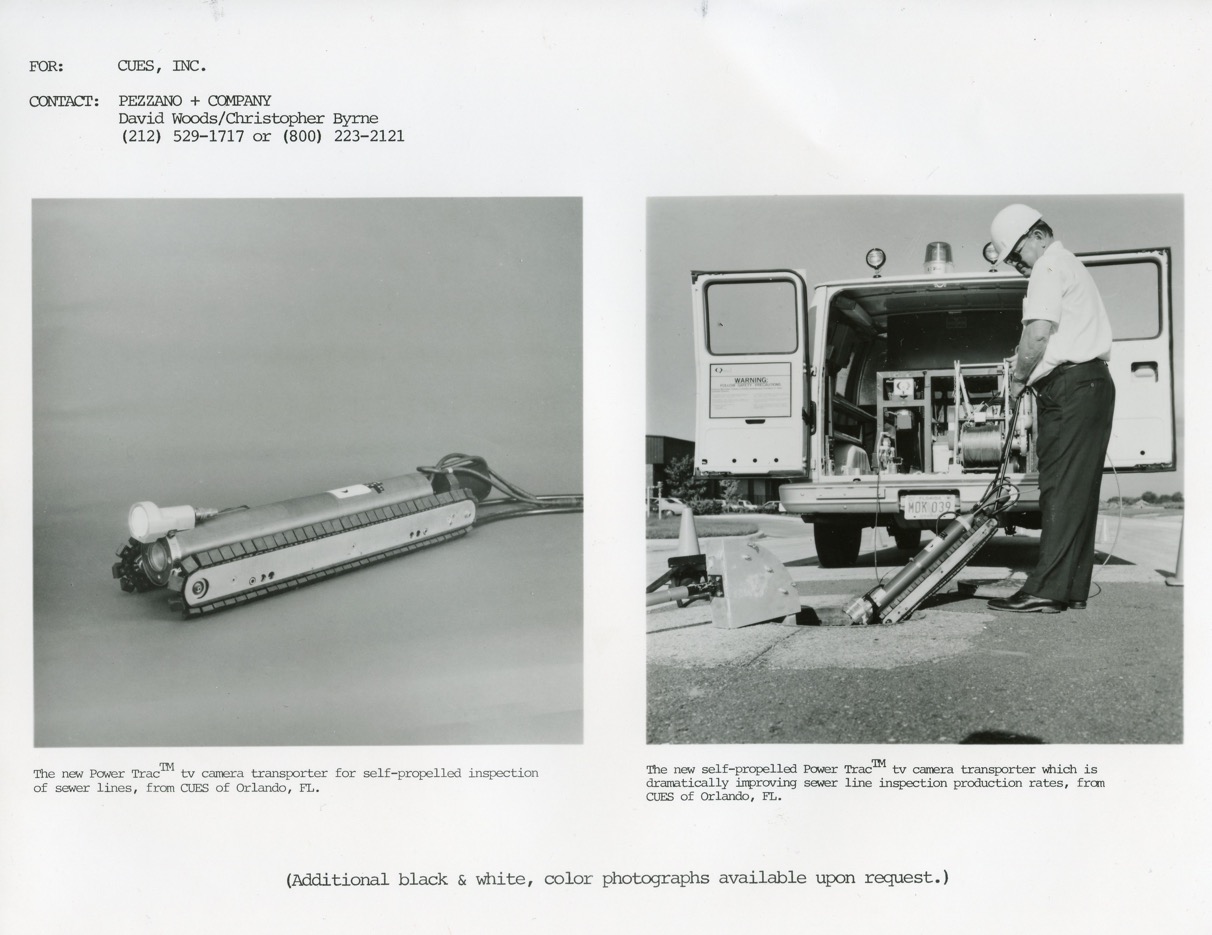 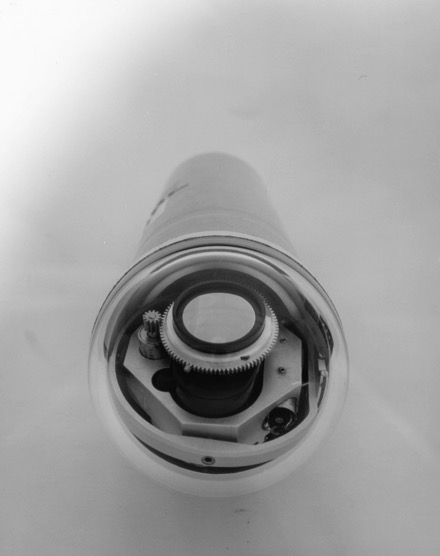 CUES then pioneered the development of the first sewer inspection camera with a moving camera head. In the mid 1980's, CUES funded a joint effort with Benthos, a Massachusetts based manufacturer of remote operated vehicles (ROV's) for the underwater industry, and the result was the first sewer inspection camera with pan and tilt capabilities. This major development for optical performance enabled the operators to achieve direct viewing of the various pipe conditions and defects as the camera head could pan and also rotate 360 degrees.

CUES had various ownership changes until 1990 when Alexander Milley and Company purchased the CUES and became highly involved in the restructuring of the company in order to produce products that would be most congruent with market requirements coupled with the highest level of customer service.

CUES set the standard in 1991 with their new workhorse truck interior, starting with a redesign effort based on ergonomics, serviceability, and durability in a design that would stand up to adverse weather and washdown conditions.

CUES developed their first full range pan and tilt camera and then set the standard with the first fully portable mini / mainline sewer inspection system called the Master Scout. This compact system included all the main equipment of a truck mounted system but was packaged in a small wheeled dolly for the sewer inspection of mainlines and lateral services. 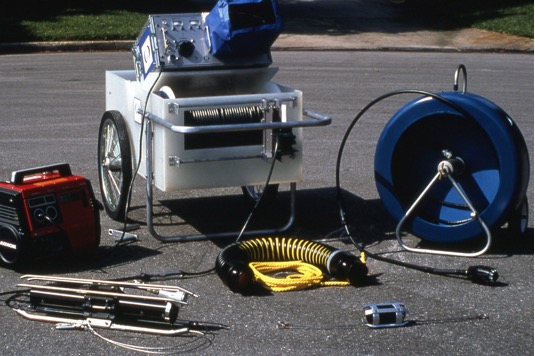 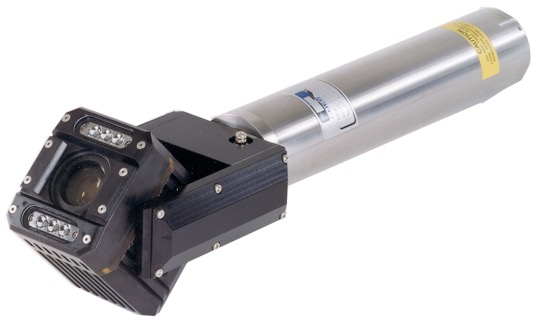 In the mid 1990's Milley had the vision that data acquisition and management would become a critical factor for all municipalities in their efforts to inspect and rehabilitate their sewer systems. He hired a full line of software and hardware engineers and CUES became the first manufacturer of sewer inspection cameras and rehabilitation in the industry to write, produce, and service their own data acquisition and information management software systems. New developments continue at a rapid pace, as present systems have unparalleled data acquiring tools and the abilities to sort data in multiple formats along with producing digital movies of pipeline inspections that are integrated with the data.

In the mid 1990's, CUES worked with a private lining contractor to develop the Kangaroo Lateral Reinstatement Cutter for the pipe relining industry. As rock solid performer, Kangaroo Cutters are used worldwide by CIPP and fold and form lining contractors.

In 2002, CUES designed and built its first Lateral and Mainline Probe (LAMP), the first American made robot capable of completing an unobstructed pan and tilt inspection of the mainlines while simultaneously launching a second camera from the LAMP to inspect the adjacent lateral service. The sewer mainline and lateral can both be inspected with one set up and pass through by the LAMP, enabling communities to identify infiltration and inflow and various defects in the both the laterals and mainlines.

During his tenure, Milley has emphasized that customer service and quality of products are primary goals of CUES. His restructuring efforts included an aggressive parts stocking program, a large increase of field service technicians, and establishing a professional training staff to work with all users of CUES equipment. In 1998, CUES established a full service center for the Western customer base: CUES WEST was started in Montclair, CA. With a full staff of mechanical and electronic technicians and a warehouse stocked with parts, the service center became a welcome addition for the western customer base.

Our customers have made CUES successful by providing continuous feedback on our products, suggestions for improvement, and years of loyalty. Our employees are committed, hardworking, and are all tasked with listening to the customer and providing the highest levels of service.

The outlook is bright as more attention is being brought to the inspection and maintenance of the infrastructure due to CMOM and GASB requirements.

CUES employs the largest staff of engineers in our industry. We have mechanical, electronic, video, software, and hardware engineers directly employed by CUES to provide the latest technology to our customer base. Research and Development is the life blood of the company, and a large portion of our budget is dedicated to these endeavors

The industry will show a steady growth due to new EPA requirements and the natural aging of the infrastructure. We think that CUES will exhibit steady growth as well. 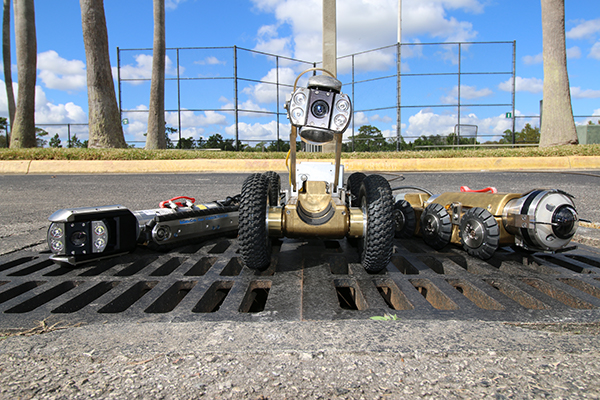 CUES is all about customer service. We’d love the chance to prove it to you. For innovative pipeline inspection technology for your sewer, wastewater and stormwater needs, contact us today.

Fill out the form to download our current product catalog and a CUES representative will contact you promptly.

Thank you for your interest in CUES.